War Novels for the War on Terror

Thirteen years ago Sunday former President George Bush declared an end to major combat operations in Iraq. Over his head a massive banner proclaimed, “Mission Accomplished.” What followed this publicity stunt—he arrived on an aircraft carrier off the coast of California riding in a Navy jet—were years of insurgency and bloodshed in pursuit of a figment: Saddam Hussein’s Weapons of Mass Destruction. 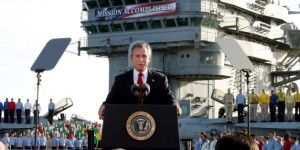 The anniversary of this symbolic gaffe in a gaffe-prone presidency reminds us that war’s insanity starts at the top, in civilian attire. It also reminds us of why great war novels like Catch-22 are so vital. They expose absurdity in wartime leadership. Absurdity like, say, W’s response to 9/11, which was to declare war against an intangible thing.

The War on Terror, launched in Afghanistan to pursue the mastermind of 9/11, soon lost its way in the sands of Iraq. W’s pursuit of figments there is emblematic of the war itself. Isn’t that the reality of going to “war” against “terror”? To this day in D.C. and elsewhere public transport riders are told, “If you see something, say something. Report suspicious activities and unattended baggage.” Announcements urge passengers to ask fellow riders, “Is that your bag?” How better to stoke fear—and hand victory to terror—than to remind civilians that the authorities are powerless to defeat the intangible?

Unlike our traditional sense of what constitutes war, the War on Terror is a civilian conflict as well as a military one. Novels about the WOT might take this into account. Not to diminish the admiration and gratitude our veterans deserve for shouldering the challenges unique to combat. Because…. 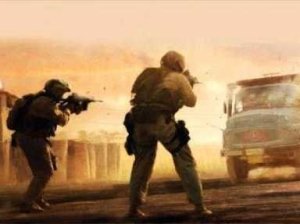 Rather, it broadens the scope of what the WOT really is, and how victory might be attained. We’ll still have those books centered in what Iraq War Veteran Matt Gallagher, writing for The Atlantic, calls “the American war writing tradition.” We know what that looks like. Military books. Tales of strategy and tactic, grit and fear, stubble and blood. Great war novels like The Naked and the Dead and The Things They Carried. For the WOT, that might be Kevin Powers’ The Yellow Birds or Gallagher’s own Youngblood.

But because the enemy also targets civilians, civilians too walk a kind of front line. And the civilian experience demands its own type of WOT novel. A book like Jess Walters’ The Zero, which plumbs the civilian psyche in the aftermath of 9/11, comes to mind.

The WOT began in a civilian setting, a non-military attack against ordinary people doing ordinary things in a maze of cubicles one fine September morning. But the WOT is no ordinary war. And the novels that come out of it—whether set deep in the heat of battle or on some other front here at home—will serve us best if they remind us that victory over terror can only come from within.

Only then do we declare, Mission Accomplished.