Yesterday a friend of mine posted our first-through-fourth grade photos online. Got me thinking about this old story in the hopper 20 years. I dragged it out and dusted it off and submit it now for your entertainment. It’s all about that first cigarette. This is to the memory of those no longer with us, Trevor and Chad.

I ROSE IN THE DARK of a dead cold winter morning, my week serving Mass at St. Barnabas. Dad dropped us outside church with a dollar each.

After Mass we bought hot chocolate and Hostess Donettes at the 7-11. In the waning dark I followed Didi and Jack back across the street to the school behind the church. Jack stayed alone to eat on the fire escape; inside Didi went upstairs to the sixth grade classroom.

I offered Mrs. Kidney a Donette soon as I entered. She declined.

Mrs. K, the fourth grade teacher, was a Yankees fan. She called herself the walking dead that fall, eyes drawn and black as the Yankees chased and lost the pennant.

Cheeks tingling, I sat on the back counter beside the radiator. St. B’s was a steam-heated, wood-floored, high-ceilinged old school. The first floor ceilings were painted white and ornately carved, like wedding cakes. The ceilings upstairs were low, office-like, with fluorescent lights and Styrofoam rectangles. Moving from fourth to fifth grade, the ceilings closed in. I was drawn to the prospect of low ceilings as I was drawn to toads belly up in the sun. Horror. Fascination.

I dangled my legs, sweaty in corduroy, over the counter. Outside the drafty windows the frigid morning turned gray.

“It’s not so bad.” I liked the bus, especially in the afternoon when the high schoolers got on. They boarded from another world, the world of long hair and black tees, studded bracelets and heavy boots, cigarettes rather than chewing gum. It was the world of the office ceiling and it fascinated me even as it terrified me. 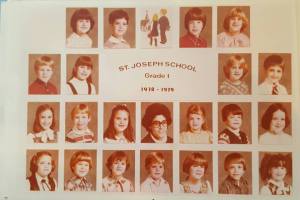