My first shark dive, over a decade ago, our group encountered half a dozen reef sharks in the Red Sea. The big monsters circled the coral an hour offshore. The sight stole my breath, my aqualung pumping furiously—not the best reaction at minus 30 ft.

The white tip is a predator, though not likely to charge across open water for a taste of human. Still, they were massive. We sent bubbles to the surface in thick veils. We watched and photographed for long minutes. 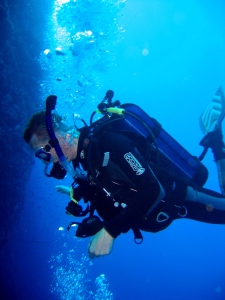 This was a side adventure during a dangerous time in Jeddah, Saudi Arabia. We’d escaped the very real threat of terrorism on shore in pursuit of terrifying thrills at sea. There was purity in the experience. The vast blue surrounded us. Our dive team numbered the same as the sharks. We had the cameras; they had the advantage.

Months later, we would be hit hard by the terrorists (more). The sharks never bothered.

This comes to mind all these years later after taking up the snorkel once again, this time with my youngest son. Our charter from Big Pine Key brought us 30 minutes out, to Looe Key reef. The wind was big and the waves bigger. They rocked the boat as we climbed down the ladder and pushed away, the six-year-old in my lap.

We fluttered, watching the fish and coral alive and colorful below. He took great pain to lift his head and say: ‘Beautiful!’ A day earlier, he wouldn’t breath with his mask lowered to an even surface. Imminent need made him an expert. 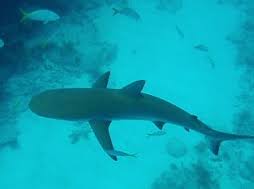 Above the sand in a trench: the familiar shape, the familiar graceful propulsion. The shark looked different from above than they’d looked in profile years ago. But a shark’s a shark and my breath left me. The question at hand: How does the boy react, in choppy water, to a shark swimming just below?

I pointed; we surfaced. ‘Shark,’ I said, and saw the grin. Our faces in, we found the shape again. He pointed. We followed. Now the experience belongs to him, as well.

*Original credit linked in photo just above. Other photos my own.

4 thoughts on “Swimming with Sharks”