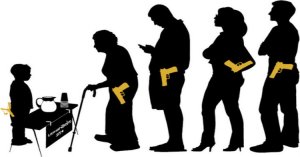 “I’ll be exercising my Second Amendment right to carry a firearm as I travel my district.”

“Here’s what’s not up for debate,” the New York Republican wrote in Monday’s Washington Post. “From now on, I’ll be exercising my Second Amendment right to carry a firearm as I travel my district.”

Collins has some right to feel the need for protection. A gunman went ballistic last week in Virginia, shooting at congressmen, U.S. Capitol Police, and staffers as they practiced for a charity baseball game. There’s no denying that it’s his right to carry a gun, within the confines limited by his permit.

But rather than play the victim of intimidation by firearms, Collins might instead have noted that congressional failure to better legislate sensible measures is part—not all, but part—of the problem he now wants to arm himself against. This failure puts all citizens in jeopardy, not just the seersucker crowd on Capitol Hill.

Or would Rootin’ Tootin’ Collins have our six year olds protect themselves from the next school shooting by tucking pistols in their Pokemon lunch boxes?

What Collins has told us is, when it comes to curbing the plague of gun violence in America, “I give up.” He isn’t bravely facing a fight; he is in cowardly fashion disturbing the peace, yelling ‘FIRE’ in a movie theater and standing smugly back with a matchstick in his hand.

His whole ‘good guy with a gun’ shtick is the personification of weakness. Collins may think he sounds tough. He may even believe his swagger and bravado are the stuff of courage and fortitude. But when he says “I’ll be exercising my 2nd Amendment right to carry a firearm,” what I hear is: “I am not man enough as nature made me. I need to tuck a gun inside my trousers to be a man.”

In his hypocritical conclusion Collins makes a plea for civility: “It’s incumbent on all of us to take responsibility for our own words—I’ve reflected on the impact mine can have, and I’ve made a firm commitment to tone things down. I hope that all citizens, including my colleagues in Congress, and the press, will follow suit.”

But we already know where Collins stands. He is ramping up the violent rhetoric. He is bringing guns to his constituency. And his colleague, Mo Brooks, seems to have taken the bait: This man wants to propose legislation allowing Congressmen to bear arms wherever they go, beyond the limits of their permits.

Before congress votes to deputize themselves, they should remember that in some communities armed law enforcement suffers a major credibility gap. As does Congress.