“The dynamics of personalization shift power into the hands of a few major company actors.” 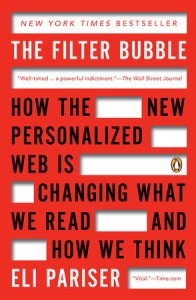 The best lines from Eli Pariser’s 2009 The Filter Bubble in ten parts. This is Part II: How do corporations abuse Internet personalization?

“If you’re not paying for something, you’re not the customer; you’re the product being sold.” –Andrew Lewis as Blue_beetle at MetaFilter.

“At Amazon, the push for more user data is never-ending: When you read books on your Kindle, the data about which phrases you highlight, which pages you turn, and whether you read straight through or skip around are all fed back into Amazon’s servers and can be used to indicate what books you might like next.”

“Personalization is a core strategy for the top five sites on the Internet—Yahoo, Google, Facebook, YouTube, and Microsoft Live.” [That was 2009. Here’s the ranking for most visited sites in the United States ten years later: YouTube, Wikipedia, Facebook, Twitter, and Amazon. Once listed first, Yahoo has fallen to 34th -ed.]

“…highly profitable personal data companies like BlueKai and Acxiom. Acxiom alone as 1,500 pieces of data on each person in its database—which includes 96 percent of Americans—along with data about everything from their credit scores to whether they’ve bought medication for incontinence.”

“’Persuasion profiling’ suggests that the kinds of arguments you respond to are highly transferrable from one domain to another. A person who responds to a ‘get 20% off if you buy NOW’ deal for a trip to Bermuda is much more likely than someone who doesn’t to respond to a similar deal for, say, a new laptop.”

“In the wrong hands, persuasion profiling gives companies the ability to circumvent your rational decision making, tap into your psychology, and draw out your compulsions. Understand someone’s identity, and you’re better equipped to influence what he or she does.”