We brought back a replica of Mysore Palace for our Navratri display.

It’s no match for the real thing, especially lit up as it is this time of year. But we’re glad to have it as a central feature of our celebration.

Our display consists of five steps populated by dolls. Some represent the gods and goddesses who lent their power to Goddess Durga in her nine-night battle against the buffalo demon Mahishasura. Others are drawn from every day life, including palace life and the work of common artisans.

Navratri is a special time, a long holiday season. Adding stringed lights to the display not only makes it more beautiful. The warm glow of mini lights feels reminiscent of the holiday spirit from my own childhood.

Our mini-palace sits on the fourth step surrounded by parading soldiers, guards, musicians, and the maharaja himself mounted on an elephant.

New to our display this year, amid the humble artisans on the second step, is a gift loom from students I met in Ahmedabad. It’s a replica of the loom used by Gandhi, a popular item for visitors to the Sabarmati Ashram on the Sabarmati river. The Ashram was Gandhi’s home for a decade and a half, serving as the launch-off point for his famous salt march to the Arabian Sea, an iconic moment for India’s independence quest. 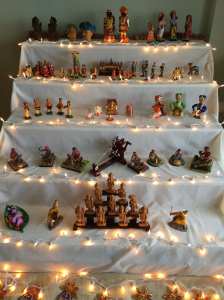 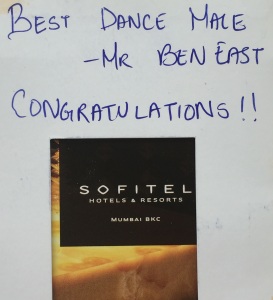 2 thoughts on “The Lights of Navratri”