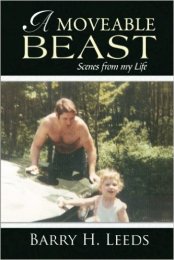 Among the acknowledgements listed back of my debut novel is Barry H. Leeds, Connecticut State University Distinguished Professor Emeritus at CCSU. Hemingway, Mailer, Kesey—these were the writers Dr. Leeds expounded to us, models who wrote tough, lean sentences and big, enduring books. I worked like hell to write the strong prose Dr. Leeds demanded in his 400-level composition course.

If we could make good use of 100 words error-free, he’d let us write 250. We got 250 right, he stretched it to 500. Leeds was telling us something: he wasn’t there to shine our turds—we were to roll up our sleeves and work that stuff ourselves. In this way, my mentor was tough.

He was also human. In his 2014 memoir, A Moveable Beast, he recounted the first days back teaching after the death of his daughter in 1996. “As the days wore on, I found myself again adrenalized by teaching. I could even crack jokes. But every day, leaving the University energized and upbeat, I got only a block or so away before I had to pull my Jeep over and break down in wracking sobs before pulling myself together and driving home.”

I put Barry’s name in the acknowledgements of Two Pumps for the Body Man out of respect, both for his role as a professor who shaped my writing, and as an archetype of a man who derived power from great books. Since childhood I knew I would write. But Barry armed me with the tools—the broad strokes of vision, the fine scalpels of craft—that turned conviction to quest. His name belongs beside my brother and sister, my parents, sons, wife, because he held that kind of unequalled significance on my path to specific accomplishment.

Barry passed away a year before the novel came out. I had no idea. I’d been in touch the year before to share a literary milestone, shortlisted for a book prize. He responded immediately and heartily. His own book was out, the aforementioned memoir. I put it on Kindle and read it right away, grateful to hear Barry’s voice one more time again. We wrote back and forth, then returned to the silence that had replaced our teacher-student relationship, he to work on further memoirs, I to the daily task of fiction. Same time, cancer went to work on Barry. When I reached out to let him know I’d finally got my novel out, the message bounced. I found out the hard way—the way that meant I hadn’t found out at all—that Barry had passed the year before, on April 15, 2015.

The book is there. The acknowledgement remains. Yet I concede a defeat, a palpable void in the achievement. Barry’s approval, his awareness and pride in this shared triumph, goes unassigned.

Only, there is this. A few weeks after publication, an anonymous review appeared.

Calls to prayer sound off with derisive omniscience, echoing through a diplomatic station situated on, in front of, or perhaps somewhere closely behind the front lines of the War on Terror. There’s no place for logic in an ideologue’s world, we’ll soon learn.

In B.A. East’s Two Pumps for the Body Man, a farce within a farce, we find ourselves strangers in a strange land—although the most unfamiliar features belong to the people and machinations of our own government.

East writes, tongue appointed firmly in cheek, as someone who experienced the bureaucracy and doublespeak of the service firsthand, introducing us to diplomats and servicepersons who are subject to, or complicit in, the gears of the WOT. Their sensibilities range from vainly ambitious to hopelessly carnal and flippant, but each unique layer of pathos is disseminated with patience and dexterity, not unlike a report from an ambassador’s trusted advisor.

As outsiders sitting behind walls, barbed wire and panes of glass, all our characters know are shrouds and faceless silhouettes. The whispers of intel they gather are flawed at best and comically manipulated at worst. As readers engrossed in a great work of satire, we can empathize.

A satirist’s world is one of its own unyielding ideology, much like the Kingdom our characters find themselves stationed in. Like them we are logicians desperately trying to make sense of it all, and it’s only when we give in to the madness of the WOT that we can find peace.

It’s a spare, precise, astute reflection of what I was trying to accomplish. As such, on its face the review gratifies. Then I learned the reviewer’s identity: a former student of mine at the American School of Asuncion in Paraguay. Bruno Passos, his classmates, and I together toured the vast landscape of American Literature and Composition from 2001-2002. We were in the same place on 9/11 and during the strange first weeks and days of the War on Terror.

And there they were, Bruno’s words, reflecting back to me the things I’d hoped to teach, and the things I’d learned years before from Barry. In the very existence of Bruno’s review I found the lesson Barry meant to impart through his own example:

For most of my life in reading, writing, and teaching literature I have lived with the assurance that I am also living literature. The books that form the central core of my aesthetic vision have also been those that inform my life ethic, encouraging and enabling me by their example to make meaningful existential choices, to flesh them out in my actions, and to live with the consequences.

Here was wadding for the void. Here was assurance that classroom exercises in literature hadn’t been for naught. The circle had come full-way around. Hemingway, Mailer, Kesey, Leeds, all may have left us. But they’ve left us with great gifts to pass along.

(Find Bruno’s insightful sports writing at Poundingtherock where he makes regular contributions to basketball lore about the San Antonio Spurs.)