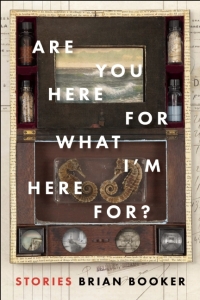 Deep oppression pervades Brian Booker’s collection of seven stories Are You Here for What I’m Here For? The mood is confining, suffocating, maddening, the writing evocative of a heart pulsing beneath the floorboards of a cabin far from anywhere. Booker awakens—allays—awakens—allays—and awakens again profound tensions: Something is wrong. Everything is ok. But something is wrong.

Prepare to contend with psychic turmoil, ordinary figures sick in unusual ways: “…The bus didn’t come and Francie caught a chill. Then she got sick, lost her legs; they burned her toys in the backyard. She ended up in that school for damaged children, sweet Francie among the mongoloids and midgets…”

Francie’s case is bad enough. And this isn’t even Francie’s story. It’s Gina’s story, Gina who let her sister catch a chill while she—Gina—awaited the attentions of a lifeguard on the last day of summer: “Gina’s mother had never let her forget that day at the pool.”

The collection’s eponymous story relates Gina’s stay, many years later, a grown woman, at a Caribbean resort, her pursuit of escape, a quest for release from the damage of the past. She’s enrolled in Sun Club Be* (don’t expect to be told what the asterisk is for; you’ll have to use your imagination), which as the brochure explains, offers “An experience for our guests whose journey includes a health challenge.” A hotel, she imagines, that is in fact a hospital “attended by nuns in starched habits, a Caribbean breeze blowing in at the window.”

Nothing in Gina’s stay is concretely wrong; rather the malice lies beneath: She couldn’t shake the notion that behind the sunglasses Russell/Raoul had a milky white eye or a ghastly scar. ‘Then we shall see you in the theater,’ the hypnotist declares.

The settings include wide-ranging diversity: a wealthy Langley neighborhood in the shadows of CIA headquarters; a mountain resort for slope-side partying; contemporary seaside towns and long-forgotten histories of remote American settlements. Throughout, Booker’s eye remains as focused as it is true. Regardless of time or place the human condition holds the center, riddled with self-doubt and confusion as the body gropes blindly through the dark, recoiling in discomfort at the unknowable objects it touches.

It’s in this groping that Booker excels. He removes us from group therapy on the committed psych ward and plants us inside the lives and the minds of those committed at a time preceding incarceration. His stories are like glimpses into the broken lives before Chief Broom and Randall Patrick McMurphy and Billy Bibbit appear in One Flew Over the Cuckoo’s Nest, all the terrible realities that drove the Chronics and the Acutes to the hospital in the first place.