East has created a wonderfully wacky consular bash in a place called The Kingdom, a nightmarish place straight out of Catch-22 where bureaucrats use every acronym under the sun (including OOPS—Office of Overseas Predator Strikes)… Haywire bureaucracy at its finest…  Robert Cormack—You Can Lead a Horse to Water (But You Can’t Make It Scuba Dive)

“East constructs narratives as a cinematographer might, only cinema would not pack the same wallop with tone-perfect lines like: ‘The shredder guy in the no-water room whose name nobody could remember…’”—Daniel Whitman, author of Answer Coming Soon and Blaming No One.

“Powerful and funny and horribly relevant.”—Preston Lang, author of The Sin Tax and The Blind Rooster.

America’s next gun massacre is inevitable.
Unless one government intern can make a miracle of his odd jobs in DC.

Gabriel Dunne’s federal internship has him tracking gun violence in America. But before he can start, his boss Chloe tasks him with planning her wedding; Parker wants help seducing their fellow intern; security chief Hubbard hounds him about expired passwords; the shredder guy needs saving from his deadly machine; and Congress threatens a government shutdown that’ll send them all packing. When a colleague is victimized by just the kind of violence their office exists to prevent, these ordinary bureaucrats must fight back, or become statistics in America’s next mad shooting spree.

TWO PUMPS FOR THE BODY MAN

When it comes to terrorism,
the enemy can’t kill us if our institutions kill us first.

Security chief Jeff Mutton walks the diplomatic beat under the cloud of an embarrassing sexual misadventure. The official he’s sworn to protect, US Consul General in Saudi Arabia Vanna Lavinia is just the blond bombshell to expose him. As Mutton works to secure the consulate and Vanna blackmails him into allowing big parties on the compound, Al Qaida plots a deadly attack on the mission. 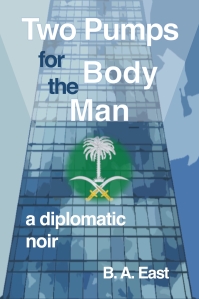 My novels take a playful approach to the problems that plague us. They’re serious literary fiction, but they respond best to readers who don’t take themselves seriously. They don’t shy from tragedy or horror, are irreverent towards the holy, stand in awe of the ordinary. I hope my readers enjoy a blend of comedy (deadly shredder machines), romance (foot-fetish blackmail), and tragedy (kindergarteners rehearsing the intruder drill).