Patchworks — a novel by Ben East 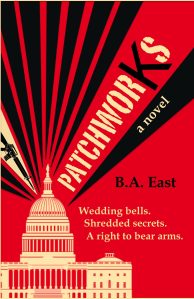 America’s next gun massacre is inevitable.
Unless one government intern can make a miracle of his odd jobs in DC.

Gabriel Dunne’s government internship has him tracking gun violence in America. But before he can start, his boss Chloe tasks him with planning her wedding; Parker wants help seducing their fellow intern; security chief Hubbard hounds him about expired passwords; the shredder guy needs saving from his deadly machine; and Congress threatens a government shutdown that’ll send them all packing. When a colleague is victimized by just the kind of violence their office exists to prevent, these ordinary bureaucrats must fight back, or become statistics in America’s next mad shooting spree.

When it comes to terrorism, the enemy can’t kill us… if our institutions kill us first. 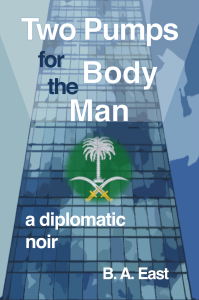 Bulldog cop Jeff Mutton walks the diplomatic beat under the cloud of an embarrassing sexual adventure, and the official he’s sworn to protect is just the woman to expose him. But it’s going to take a lot more than long legs, short skirts, and wicked blackmail for Consul General Vanna Lavinia to get what she wants: a lucrative ambassadorship in an oil-rich nation. Cuddling up to influential sheikhs, Vanna pooh-poohs Mutton’s advice to beef up security at the American Consulate in Saudi Arabia, bending her efforts instead to hosting grand parties. Angered by American debauchery in Islam’s holy land, five militants storm the consulate to shed American blood in aviolent climax that’s all-too-familiar for our diplomats in the Middle East.

An alternative to standard noir, Two Pumps for the Body Man explores the substantive matters of national security while plying its share of sex, madness, and black humor. This dick-v-dame account of diplomatic crimes in dangerous places will have you howling out loud, and shaking your head in dismay.