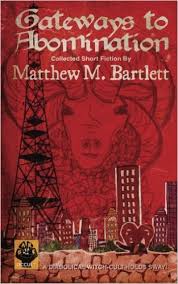 A parade of horrors files past in Matthew Bartlett’s Gateways to Abomination, accompanied by the strains of an otherworldly broadcast. The discord awakens both terror and fascination, makes our eyes pop even as we struggle to look away. The writing—poetic, detailed, traumatizing—gives lift to hairs we didn’t know we had at the back of the neck.

These pieces sprout mold, inedible and stinking, in the dark, damp forests of our worst imagining.

when i was a boy—a broadcast opens simply enough. It begins as a story about three kids who may well eat frogs. It ends in the immolation of townsfolk enjoying the rapacious company of a woman who’s chained her sons to a tree. Is it right even to call those boys friends of the narrator’s? “I once saw Christopher trying to strangle a tomcat and I jammed a thick branch into his ear until it spat blood and I handily convinced Alex to take the blame.” Among the debris of his arson the narrator finds numerous oddities, including “Three-eyed spectacles and a bucket full of feet.”

What evils led to the fire? What had the narrator endured for hours or days inside that abode? “Mostly there was her, from every angle and in deep in every fold…there were long stretches of time when her flesh filled my throat and seemed to be on the verge of somehow invading my very lungs.”

In the ballad of ben stockton (verses 1 and 2) a receptionist has no fingernails and a dentist, Lisle-Pearl, a mouth like this: “His teeth were in shambles—browned, broken. I swore that I saw one tooth… a lateral incisor?… swinging from a sinuous pink thread from an expanse of red upper-gum.” Good luck leaving this nightmare: “His enormous hand clapped my shoulder and steered me down a short hall and into a room in which loomed a dental chair and the attendant apparatus.” Lisle-Pearl’s assistant, Sithyl, wears nothing beneath her tight white coat. Are we to experience pleasure or pain? Either way, we’ll taste blood.

Bartlett’s mind is a coven of dark ideas, radio waves tying his tight collection together: odd towns and backwoods places, sinful happenings and basement libraries of occult knowledge. This is New England at dusk in fall, dark and native with a history of witchcraft.

uncle red reads today’s news comes off like tabloid tales of superstition. “A tortoise-shell cat in the Holyoke flats did kill Mr. Henry Floret, who before he expired exclaimed that the beast bore the eyes of man and spoke to him in prophecies of danger and ruin. Floret was bled dry and his corpse blew away in wisps and sheets on the heavy winds before the coroner could fetch it.”

If its stories and narrative arc you seek, look elsewhere. Here find the impossibly bizarre beside the utterly mundane. Here find not stories so much as vignettes, pieces of ambience, the mood of haunted dreams, the leavings of foul ideas, vibes encompassing the poetry of horror.

These macabre tidings will make you gag. And taste it.