Which narrative is more credible?

One: An American real estate tycoon with unsurpassed ego, a lifetime of well-tracked misogyny*, and a Soviet-born bikini-model spouse—his third—is snared by an adversarial intelligence service while cavorting with Russian prostitutes during a business trip to Moscow.

Two: The Russian FSB, renowned for its use of compromising material against adversaries and eager to return Russia to its former prominence, fails to exploit the easy target described above as a primary vehicle for disrupting the democracy that crashed its political system almost three decades ago. 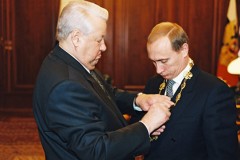 If you chose option two, please return to watching Celebrity Apprentice or whatever rubbish entertains you. In light of the more likely scenario, then, what logical actions remain for the compromised individual?

1. Distract the public from real problems by promulgating bombast and insulting views about iconic American figures, for none of which is there any accountability.
2. Sow doubt among the population by publicly insulting the work of U.S. intelligence services and discrediting their non-partisan effort to protect the country from foreign aggression. (Intelligence agencies should never have allowed this fake news to “leak”… Are we living in Nazi Germany?)
3. Raise the specter that all news is “fake news.”
4. Refer to all unfavorable poll results as “phony.”
5. Put the interests of an adversarial nation ahead of those of the United States, starting with the disruption of a trans-Atlantic alliance that maintained global stability and a U.S. leadership role for 75 years.

This last qualifies as treason. Article 3 of the Constitution states that Treason against the United States, shall consist only in levying War against them, or in adhering to their Enemies, giving them Aid and Comfort. Our sedition law also punishes actions that undermine national security, with a lower standard for prosecution.

The existence of kompromat on our future president remains unconfirmed. But the possibility that his actions in favor of a long-standing enemy are tied to threats of blackmail from abroad are worth investigation. And not just by the media, but by Congress. Will a Republican-controlled Congress fulfill its mandate as a balance to executive authority, or will they put their party before country?

If we are living in a re-run of Nazi Germany, I for one choose to skip ahead to the Nuremberg part, where investigation and trial ends in due punishment.

* The subject on bad press in Esquire, 1991: “You know, it really doesn’t matter what they write as long as you’ve got a young and beautiful piece of ass.”; In his 2005 encounter with Billy Bush the individual tells the tape: “You know I’m automatically attracted to beautiful — I just start kissing them. It’s like a magnet. Just kiss. I don’t even wait… And when you’re a star they let you do it. You can do anything… Grab them by the pussy. You can do anything.”