San Francisco–can you get any stranger? Spiked baseball bats chained to parking meters all over town. They appeared, 27 of them, on Thanksgiving: preparations for the Black Friday zombie shopper apocalypse? 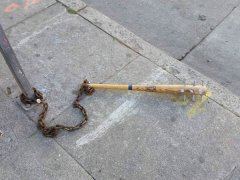 Speaking of crime, baseball, and the City by the Bay: check out Tom Pitts’ Knuckleball…

The whole city of San Francisco wants a cop-killer caught. Over at Giants stadium Hugh Patterson’s jolly mug fills the Jumbotron: 30K reward and the good will of the city, the tabloids, the cops.

Patterson was a good cop. No ordinary beat-walker. Loved his uniform, helping old ladies and handing out stickers to kids. He was a believer, a Giants fan. He was a man of the people until one of the people put a bullet in his head, then five more for good measure.

Patterson’s partner, Vince Alvarez, a cop in golden handcuffs, doing his time until retirement. Bust the baddies and get home to his wife, his high school sweet heart. Doesn’t give a fig about more than that. She’s his reason for being and maybe some day they’ll have kids.

Shooting at 24th and Capp, San Francisco’s Mission District, good cop goes down. Bad cop’s got a shoddy story, looking for someone to pin it on.