Seriously, wake up America. These are the times you live in now.

“Heroes, by buying and reading this book, you’ve proven you get it–and are therefore now members of the nominating committee for The Stephen T. Colbert Award for The Literary Excellence.” Use the medallions below to nominate any book that you feel embodies the values of the Colbert Nation.”

Therefore, it is with great pleasure that I take all cheap thrills seriously. I am taking time off from writing “He’s a Pfeffer, She’s a Pfeffer”—it’s about army drum major Sgt. Tom Pfeffer and his consultations with the base psychologist, Dr Lucy Pfeffer—to nominate a few books for The Stephen T. Colbert Award for The Literary Excellence.

Congratulations, Ted Prokash. I think. The Brothers Connolly is the first to be recognized!

Stay tuned. And be warned, America, these are the times you live in now. 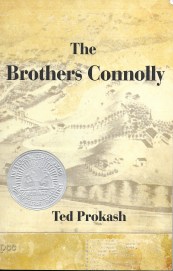 The three brothers are products of a cruel and sadistic old gossip, Martha Connolly, and her dwindling husband George. At the suggestion George may be dead Martha looses “a terrifying cackle… the broad blade of her wicked laughter” flaying the air. Against Teddy. Against Teddy’s beloved Natalia. Against, even, the anonymous and suffering opponent whose jaw just got broke by her football hero grandson: “Oh for Peter’s sake! Get off the field then!” Martha exclaimed, much too loudly. “He’ll have to toughen up a bit if he wants to play football.”

Is it any wonder, then, that father George should find himself perched eternally atop a barstool, a man of lost dreams? What happened to this man’s dreams?

Here Jack was struck with a thunderbolt revelation. All at once the totality of his self-absorption became frightfully clear. That his own father could have reached such depths of despondency without his ever guessing it filled Jack with a sudden, acute shame. He felt like a forty-year old child. Never in his life had it occurred to him that his parents might once have been young, or that they too might have known the hopeful dreams of youth. Thus, as his father indulged a rare urge to reminisce, Jack was all rapt attention, mystified in his personal discovery. He was like a pilgrim at the gates of the New World—a world of black fecund soil, every bit as ancient as the earth itself.

With these revelations and this fine writing Ted Prokash delivers an excellent novel. If there’s a flaw, it’s that he loves his characters too much, holds great fraternal or paternal pride in their lives. He gives them pain but it is ordinary pain. We are not shocked. The unwanted pregnancy is far in the past but would have made a cringeworthy hook here; the local homosexual busted for soliciting a prostitute takes his habit off-screen; our drunks fall asleep, often, without real consequence. Even the unfulfilled playwright, in the end, finds something that will give him joy.

Readers looking to savor good prose and to meet relatable characters living ordinary lives will enjoy the powerful beauty and lyricism of Ted Prokash’s work. His scenes are drawn with vibrant lines that pulse and throb. The Brothers Connolly is comforting, a sort of homecoming