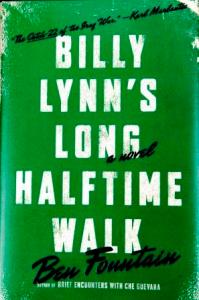 Thanksgiving. The most American day of the year. More American, perhaps, than the Fourth of July.

For the heroes of Bravo squad, barnstorming the U.S. on a brief victory tour to rile up the natives before returning to the front lines of the War on Terror, there is nothing more American than this. Even the stadium concourse reflects Americana: “Your Taco Bells, your Subways, your Pizza Huts and Papa John’s, clouds of hot meaty gases waft from these places and surely it speaks to the genius of American cooking that they all smell pretty much the same. It dawns on him [namesake protagonist Billy Lynn] that Texas stadium is basically a shithole.”

Here’s a grunt deeply scarred by the memory of squatting in the roadside reeds next to his dying buddy, covered in blood, half-wondering if any of it is his, “His bloody hands so slick he finally had to tear open the compression bandage with his teeth.” Yet Texas Stadium’s the shithole.

This early passage about sums up the point of Billy Lynn’s Long Halftime Walk. Not a war novel so much as a warrior’s rebuke of the country he’s fighting for, a blazing satire of patriotism on the home front while the national treasury is raided in pursuit of a wholly unnecessary, errant, distracting war.

“The Catch-22 of the Iraq War”
–Karl Marlantes

It’s an accurate premise but a flawed approach, a long-ass slog covering maybe six present-time hours while the he-roes of Bravo squad (there is no such thing as Bravo squad) sit on their hands and drink with wealthy Texas hot-shots and wait to watch one of the dullest games on earth (football is still better than curling). Long before the end Ben Fountain’s satiric display of Americans at their worst is collapsing under its own weight. Anyone hoping for a better understanding of what the soldiers in Iraq have gone through should choose The Yellow Birds instead. This story tells us what we witness every day: the worst of America.

That isn’t to say Ben Fountain hasn’t got a few sticks of dynamite up his sleeve. There’s magic in the neat line he draws between the game of football and the game of war, the equipment production of a pro football team and war-time’s production of death. “Soon after kickoff Billy intuits the basic futility of seizing ground you can’t control.”

More than his own heroic actions, gunning down the enemy while simultaneously applying pressure to his buddy’s bleeder, that have made Bravo squad the toast of Amurica, Billy’s got Shroom on his mind. Shroom, the magical, mystical figure who embodies the warrior-poet (in contrast to Dime, the tough Sgt. In charge). Shroom foretells his own death and its simple as that: “I’m going down.”

When the grateful citizens meet him, “His ordeal becomes theirs… some sort of mystical transference takes place and its just too much for them… One woman bursts into tears, so shattering is her gratitude. Another asks if we are winning…”

Another grateful American man suggests the proper response: “You and your brother soldiers are preparing the way.” The question is—and we now know the answer—Preparing the way for what, exactly?