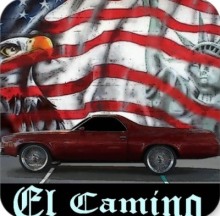 My son’s offering his services as my campaign manager. More than the trappings of power, I think the third grader’s hooked on creating slogans.

‘Want the Best?
Vote the Beast.’

Beast is a nickname I picked up in Jr. High. It was my sister’s fault. A clever P.E. teacher pegged her first initial against her last name, and the Beast was born. When I started climbing rope two years later, the name was passed down to me and I became the Beast myself.

Now you know an intimate secret about me, and if ever I choose to run for congress you can vote confidently in my favor.

My campaign manager and I wouldn’t dream of printing up yard signs and sticking them on lawns all around town. Littering is not our style. We can’t make a similar campaign promise about bumper stickers, though. Slap my slogan on the rear of a black El Camino and picture me rollin’.

My son thinks a campaign would be fun, issuing clever and pithy tags. I’m more circumspect: I see it as a wild ride.

We haven’t announced yet. We might never. We don’t even know the correct order of things. So far, the whole enterprise is uninspiring: papers to file; fees to pay; signatures to seek. You have to have an awful lot of money—not to mention self-esteem—to run for congress.