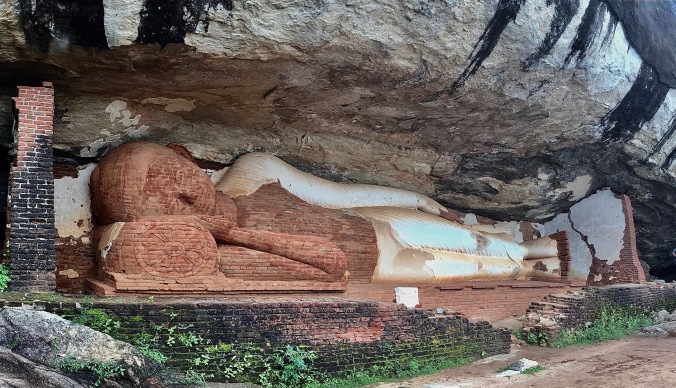 Earlier this week I climbed Pidurangala, a high cliff overlooking the forests around Sigiriya’s ancient ruins in central Sri Lanka.

Painted numbers on a rough board indicated the climb would rise 628 steps, uneven and rough-hewn from wet stone. I counted hundreds more than that before reaching the Buddha in repose, just below the summit.

I’d already been thinking about an old friend. The feel of the place—slippery wet stones, a heavy drifting mist, rich woods all around—recalled a forest retreat he shared with me in my native Connecticut.

The place, Bolton Notch, is hardly remote. The busy I-384 and Rte 44 corridors run just below this overlook north of Hartford, the state’s capital. But like the mystic Pidurangala, Bolton Notch rises away from normal earthly pursuits. It gives refuge to deer and other wildlife, provides shelter for wanderers and other lost souls.

We had little: living at home, uninspired by college, drifting to jobs picking berries in a local orchard or slicing meat at a hometown deli. These were the days of cars that wouldn’t start, of racing downhill on in-line skates out of control and desperate for a taste of life beyond the edge…

I turned to Kerouac plenty back then, particularly The Dharma Bums. I’d concluded from the frenzied  On the Road a vast hopelessness, a facade to the speed and energy of most pursuits.

Buddhism wouldn’t help Kerouac. But my friend, I’d say, had a hint of his own dharma, and he lived it in part at Bolton Notch. For him at the time it consisted of the feel of cold stone alive under his hands; the damp scent of earth—an old inhabited cave—filling his head; fingertips gripping narrow crevices, life-desperate, on short free climbs up the sheer cliff; exposure to the elements where the cliff opened wide.

Beyond, a sweeping view of the Connecticut River Valley.

These were the sensations he craved, found, and shared, when school and future seemed hopeless.

I finished my hike at Pidurangala, the part from Buddha to the Sigiriya overlook, with this old friend in mind. Though he’s long since passed from this earth, the peace he brought in desperate times accompanies me to this day, far and wide.

For more on present-day explorations at Bolton Notch (mine took place over a quarter century ago), watch this video by Matt Woodward. He delves into some fascinating history behind Squaw’s cave and the 17th century occupants who called it home.