Years ago I traveled the sands of Saudi Arabia, stopping along the way to tour the  old camel train forts.

I visited these caravanserai along the Hejaz Railway, the line targeted by T.E. Lawrence and the Arab Revolt against the Ottoman Empire during World War I. My journeys between 2003-05 took me north from Jeddah through the remains of the Nabatean civilization and ultimately to Jerusalem via Petra and Amman, in Jordan.

My latest camel-train find—Khabha Fort—sits along India’s Spice Road. Unlike the Turkish Fort in Western Saudi Arabia, this caravansary fronts one of over 80 abandoned villages.

According to our guide, the Brahmin residents of Kuldhara abandoned their homes more than two centuries ago over caste differences with a local warrior king who’d set his sights on one of their daughters. Rather than submit to inter-caste marriage, the community (and  80 or so other village communities) fled.

Other explanations for the abandonment include water issues (desecration of wells, sudden loss of water) and geology, like an earthquake. Whatever the reason, this caravansary now overlooks spectacular emptiness.

That emptiness exists, too, in the sands around the Arabian Peninsula’s Nabatean ruins. The desert there is empty (except for the tourists, and Harrison Ford’s crew filming the third installment of The Raiders of the Lost Ark in Petra). 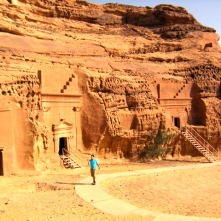 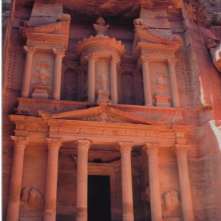 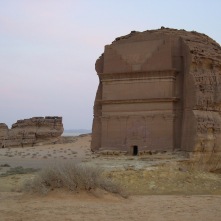 Another difference between the Hejaz Railway and India’s Spice Road lies in the question of abandonment. Where Kuldhara is deserted, their Arab counterpart seems to have left one set of earth homes behind, only to find life nearby in the oasis at Al Ula.

2 thoughts on “A Trail in Two Countries”