I don’t plan on writing porn any time soon. Probably never. But this article from today’s New York Times Magazine, about the life of one prolific pornographer, had me thinking about what I write and how I write it. The piece helped me calibrate the struggle against my greatest bane: The lack of time. I’m a career man with a job I enjoy; I’m a family man with a wife and two sons I love; I’m a baseball coach, a soccer father, a runner, biker, surfer, swimmer. My busy life makes demands even as my current novel reveals itself to me and requires my devotion. So I wonder, how much more could I produce, how much better would my writing be, if writing were my only pursuit?

Chris Offut’s piece is worth reading in its entirety, but I extract here the portions relevant to the question above. They provide a glimpse into one writer’s process, and a moving tribute from a son to his father. 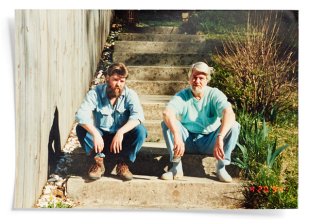 Chris and Andrew Offutt at home in Haldeman, Ky., in 1994

Offut recalls the process of clearing out his father’s office, a deep mine of written and graphic material gathered over a lifetime that produced more than 400 novels. We get a glimpse into the mass-production of literature (or, if you prefer, “literature”). A bleeder myself–carving and re-carving words, agonizing over sentences and paragraphs, cutting and moving whole pages and chapters and sections for literally YEARS before my work approximates a novel–I’m astounded at the prospect of churning out a book in three days.

Dad’s writing process was simple — he’d get an idea, brainstorm a few notes, then write the first chapter. Next he’d develop an outline from one to 10 pages. He followed the outline carefully, relying on it to dictate the narrative. He composed his first drafts longhand, wearing rubber thimbles on finger and thumb. Writing with a felt-tip pen, he produced 20 to 40 pages in a sitting.

His goal was a minimum of a book a month. To achieve that, he refined his methods further, inventing a way that enabled him to maintain a supply of raw material with a minimum of effort. He created batches in advance — phrases, sentences, descriptions and entire scenes on hundreds of pages organized in three-ring binders. Tabbed index dividers separated the sections into topics.

Dad was like Henry Ford applying principles of assembly-line production with pre-made parts. The methodical technique proved highly efficient. Surrounded by his tabulated notebooks, he could quickly find the appropriate section and transcribe lines directly into his manuscript. Afterward, he blacked them out to prevent plagiarizing himself. Ford hired a team of workers to manufacture a Model-T in hours. Working alone, Dad could write a book in three days.

But the article gives us much more than reflections on process. It also touches on–and moved me deeply with–a father’s estrangement from his children as they grow older.

When we were young, Dad played board games with us, taught us poker, hearts, and spades. He had a vast capacity to make us laugh. We adored him and begged him to play games after supper. He made our evenings fun. But as we got older and more mature, Dad remained the same. The humor slipped away from his oft-repeated gags. His deliberate naughtiness — when a dice roll came up six, he’d call it “sex” — evolved to outright sexual comments that produced a strained silence instead of laughter. Dad missed his attentive audience, but the old ways no longer worked. One by one we did the worst thing possible: We ignored him. I believe this hurt him deeply, in a way he didn’t fully comprehend and we certainly could not fathom.

Four hundred books is a lot of books–porn or not I admire the prodigious output. But I’m not Henry Ford. I am not making cars. I love my family and want to be just as relevant to my sons in their adult lives as I am to them at 6 and 4. I’ll choose to bleed, and hope to produce great books.

Sorry world. You’ll just have to wait to meet McDaniels Walter, the federal contractor whose tie gets stuck in the office shredder and nearly pulls him to his death.