A lot of excuses have been made on behalf of Brian Williams since his fabrications went public last week. None of them are good. None of them can buy back the credibility every journalist requires as their professional stock in trade. But I was surprised to find one of the worst excuses in The New Yorker on Sunday, a piece titled Brian Williams and the God Complex. 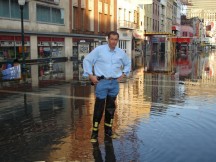 I take exception to more than one point Ken Auletta makes along the way, but here’s his worst:

While the spotlight is on Williams’ transgressions, a word about the complicity of NBC and the other networks’ marketing machines. The networks have a stake in promoting their anchors as God-like figures… On his helicopter in Iraq, Williams was accompanied by an NBC crew. Did they not speak up to correct the record for fear of undermining the powerful anchor?

First, nobody is to blame for Williams’ transgressions other than Williams himself. He made these falsified claims on numerous occasions over several years, statements made with bloated self-importance and the intent to convince a viewership of his heartiness and bravery. But now we find in him the opposite: cowardice… he remains afraid of the truth. His performance last Wednesday, far from heartfelt apology, was just more spin, insincerity, and excuse making.

Second, in what hierarchical structure does “the crew” have latitude to “correct the record”? Does Auletta suggest that a cameraman should come forward publicly on his own, putting his livelihood in jeopardy? Another crew—the military crew flying Williams’ Chinook—had already been howling publicly for years about the falsehoods, to no avail. It might be fair to ask if a crewmember approached the NBC brass about the issue, but we’ve already learned from Auletta’s own argument that the network would have no interest in such claims. After all, he says, they have a stake in Williams’ God-like status.

Another excuse Auletta offers is that “The anchor is treated as the citizen’s trusted guide to the news. As a result, they can feel expected to dominate discussions, to tell war stories, to play God. It’s a short distance from there to telling fantastic stories—and maybe actually believing them.”

Maybe this pop psychology is true. But believing one’s own lies through repetition does not excuse mendacity. And in the case of an anchor—a journalist—it flies in the face of a core professional value. Rather than excuse Williams, this line of reasoning should serve to shame him further. A “trusted guide” is a position of humility, not omnipotence. It is a position of responsibility, not power.

None of this should have surprised me given the thin gruel with which the article began. At the outset Auletta compares Williams’ situation with that of former Miami Dolphins Quarterback Dan Marino: “I’m reminded of Marino because he just appeared on my TV screen as a pitchman for Nutrisystem”. So, this piece is driven by whimsy? By the chance appearance on TV of a disgraced celebrity? There is barely the thinnest of connections between an NFL star’s off-field philandering, and subsequent cover-up, and a trusted journalist’s blatant, repeated disregard for his professional code of ethics while on the job.

No, Williams’ case is less like Dan Marino’s, and more like that of Milli Vanilli, the 80’s pop stars who hopped around in black tights while pretending to sing, “Girl you know it’s true…” All performance, all show, all sizzle and no bacon. And now, we know, it just isn’t true.