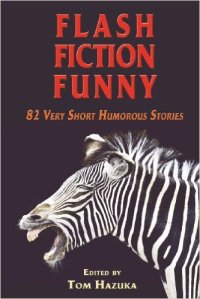 There are many, many reasons not to read Flash Fiction Funny while riding public transportation. The first and perhaps best reason is Taylor Mali’s The the Impotence of Proofreading, which will leave you bent over double and wheezing for breath, the workaday passengers all around contemplating the emergency brake at the back of the train.

In examining the pros and cons—mostly the cons—of relying on spell-check, Mali’s story reminds readers that ‘It only does what you tell it to douche. You’re the one with your hand on the mouth going clit, clit, clit. It just goes to show you how embargo one careless clit of the mouth can be.’

Tom Hazuka’s anthology also contains Sarah Russell’s Mother’s Last Wishes (‘Susan, you have always been good at arranging things, like that abortion you never told me about, so you are in charge of my cremation.’) and Colin McEnroe’s take on academic research in Primitive Man Tames the Wolf (Methodology: Everybody stand at edge of darkness waving wild pig meat and say: Here, wolf. Nice pig meat! Here, wolf! Result: Wolf run in from darkness, take baby, run away. Conclusion: Concept need retooling.)

Arthur Hoppe’s The Waiting Game turns the table on your doctor and imagines a house call featuring a living room full of doctors waiting to see their patient, while Chuck Rosenthal gives it to us straight about the wisdom behind academic advising in Intimations of Immortality.

The poor student, she has to take both.

I also liked Hazuka’s own Sunflowers of Evil, in which Rimbaud accuses Baudelaire of writing for Readers Digest; and Barry Leeds’ Not the Bend Over Part, excerpted from his autobiography A Moveable Beast. Both were my writing instructors, a quarter century ago, at Central Connecticut State University, and hearing their voices here was both hilarious, and nostalgic: ‘In the immortal words of that arrogant popinjay George Armstrong Custer, “Where the fuck did all these Indians come from?”’

This collection has a little something for everyone—the high school teacher with five extra minutes at the end of class; the university professor hoping she’s not alone in the world; the dull bureaucrat riding to work on a dreary winter morning; even the procrastinating writer in search of a prompt can look to Dan Weincek’s Thirteen Writing Prompts: 1. Write a scene showing a man and a woman arguing over the man’s friendship with a former girlfriend. Do not mention the girlfriend, the man, the woman, or the argument.

Like 82 shot glasses lining the bar, Flash Fiction Funny delivers quick, sharp relief from the world around us. In short, it’s a trove of seriously funny shit.