I want loyalty, I need loyalty 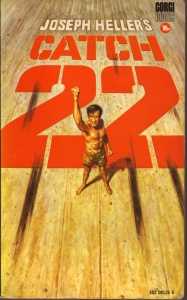 No writing has influenced my work more than Joseph Heller’s Catch-22. Not the Bible. Not the Constitution. Not even The Adventures of Huckleberry Finn, which is a pretty great book and should be thrown full force at anyone who tries to ban it.

I wrote my first novel, Two Pumps for the Body Man, under the deep influence of Catch-22. I wrote it to oppose tyranny. I wrote it in response to the maddening bureaucracy all around me. I wrote it to protest a blind march to war in Iraq because of an attack that originated in Afghanistan.

Part of that project died with the natural lapse of the Bush-Cheney era, the Rumsfeld snowflakes era, the Valerie Plame/Scooter Libby era. The book had yet to be published and already, with the passing of the forces behind the so-called ‘War on Terror’, it had become irrelevant.

Or had it? After 52 years, has Catch-22 become irrelevant?

One of the more scathing passages from that classic relates to the headlines today. In The Great Loyalty Oath Crusade, Captain Black has all the men in the combat squadron ‘dominated by the administrators appointed to serve them’ and ‘bullied, insulted, harassed and shoved about all day long’ even as they suit up and prepare to fly into anti-aircraft artillery.

“The important thing is to keep them pledging,” he explained to his cohorts. “It doesn’t matter whether they mean it or not. That’s why they make little kids pledge allegiance even before they know what ‘pledge’ and ‘allegiance’ means….”

…“Of course, it’s up to you,” Captain Black pointed out. “Nobody’s trying to pressure you. But everyone else is making them sign loyalty oaths, and it’s going to look mighty funny to the F.B.I. if you are the only ones who don’t care enough about your country to sign loyalty oaths.”

In the final version of Two Pumps, the idea of an oath to loyalty is whittled down to a few lines in a passage about secrecy. Two junior officers are asked to sign declarations of loyalty, discretion, and, finally, the SDDTS Clearance Waiver Non-Disclosure Form, which is a meaningless form that doesn’t exist, mainly because Super Duper Double Top Secret Clearances don’t exist.

As far as I know.

But loyalty exists. It’s a return on trust. And those who want it, those who need it, must first earn it.

*Where they have burned books, they will end in burning human beings.
-Johann Heinrich Heine