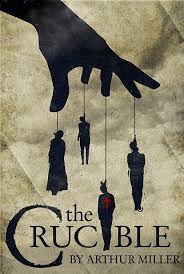 Let’s not kid ourselves. Among the many mistakes in Arthur Miller’s talented life (he divorced Marilyn Monroe after just 5 yrs) was his choice of title for The SINGLE GREATEST Story About American History’s Salem Witch Trials.

The Crucible. The Crucible? What’s this, Chemistry class? Are we grinding elements here to torch them with a Bunsen Burner? No wonder High School English was such a drag! We were stuck reading “The Crucible” when we could have been reading:

How our young minds would have tuned to the salacious proceedings! We may not have had Smart phones and Twitter feeds back then, but we sure had our share of demagogues in the corridors of power. How much more quickly would Joe McCarthy have been taken down if only Arthur Miller hadn’t been such a pansy about his title!

I’ll leave you with a bit of wisdom overheard in my high school’s 3-corridor lav, a place where renegades and truants filled their lungs with smoke during the long years of forced reading. They seemed to have retained something of those lectures about Salem, about Washington, and about the natural state of man. None other than high school bully D. Whalon said, staring into the abyss of the toilet in the stall next to mine:

Washington’s mighty Potomac, already a cesspool of toxic runoff and waste, might just be the place to test this theory in our modern day WITCH HUNT. And I wonder, if he were to be dunked unto its waters, would the hunted Don John himself sink? Or would the turd float?

One thought on “Witch Hunt”